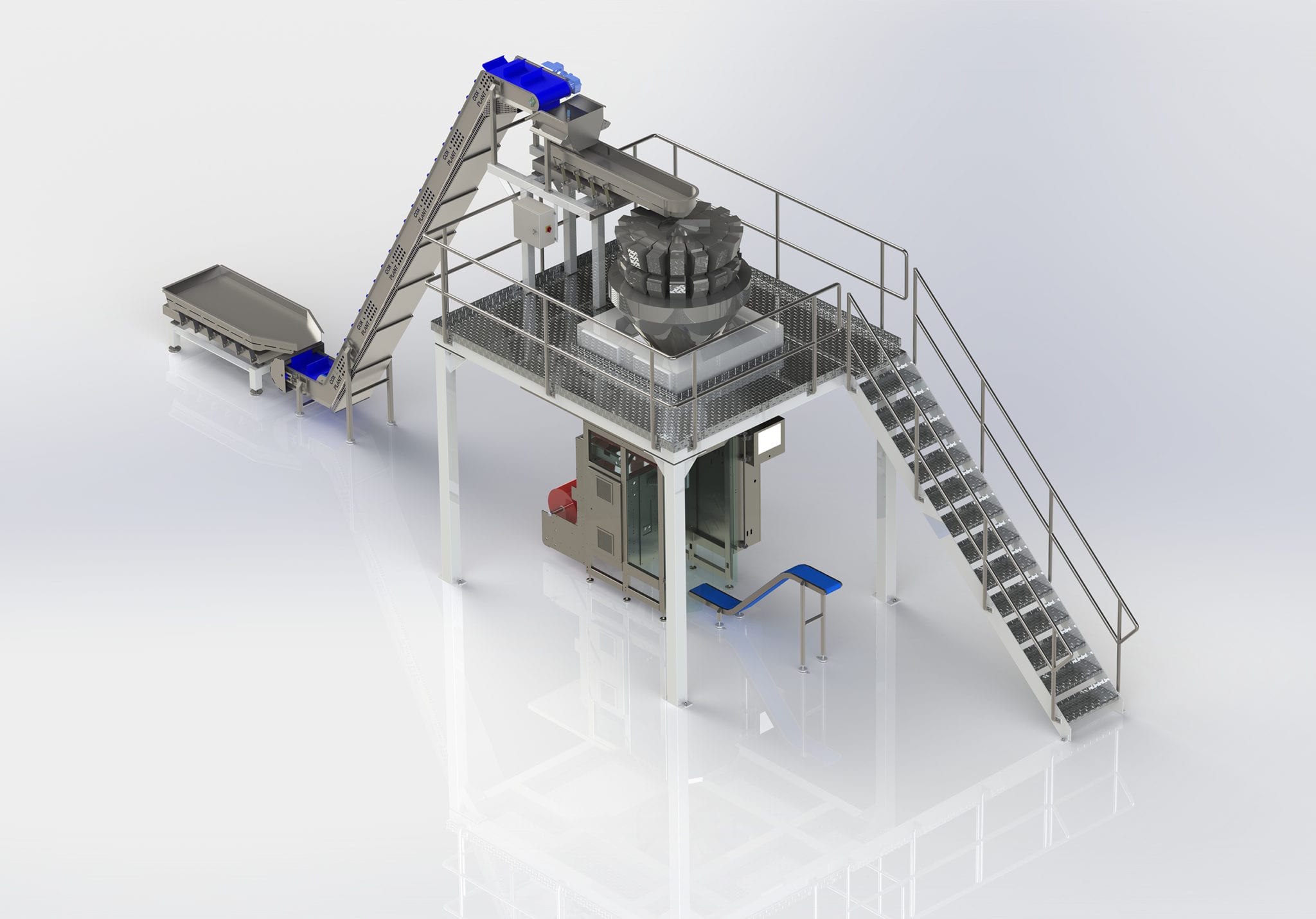 Multihead weighers use a number of different weigh heads to generate precise measurements of products by calculating the weight in each weigh head. Each weigh head has its own precision load cell. The perfect algorithm for an accurate target weight is typically 4 weigh heads. The weighing process begins when product is fed into the top of the Multihead Weigher.

The multihead weigher will never be accurate if the dispersion table is overfed. In this case the target weight becomes much more difficult to achieve because too much product is supplied to each weigh head. Production lines will stop in some cases as the multihead weigher shuts down if certain levels are surpassed. Operators occasionally overfeed the multihead weigher under the impression that this helps. This is not true, as it disables the system’s ability to release product when programmed weight tolerances are exceeded.

When the dispersion table is underfed the production line slows down. Not providing enough product into the weigh buckets slows down the operation of the multihead weigher and makes it more difficult to achieve the target weight. This can also increase the amount of rejected products which are below the required threshold.

Two feed systems into the dispersion table are currently industry standard, vibratory and belt conveyors. There are several issues which arise from feeding a multihead weigher directly with a belt conveyor.

Belt conveyors are not responsive enough to stop accurately when the dispersion table is full. Due to the action of the belt conveyor and the way it conveys product, when the multihead weigher gives the signal to stop, excess product continues to fall onto the dispersion table. This leads to overfeeding of the multihead weigher, which hinders the ability of the machine to produce an accurate weighment and often leads to significant amounts of giveaway of product.

Biased Feed of the Multihead

Due to the belt conveyor being a straight edge discharge, product feed tends to fall primarily on one side of the multihead weigher. Buckets on one side are overfilled and on the opposite side are underfilled. This makes it more difficult for the multihead to produce an accurate weighment and often leads to significant product giveaway.

Product Dispersion on the Belt Conveyor

A belt conveyor does not disperse product across its width during conveying. This leads to a feast and famine effect at the outfeed where product is not evenly fed onto the dispersion table.

Improved production efficiency can be achieved through the use of a vibratory cross head feeder. Through extensive trials over the last 25 years we have proven that by feeding a multihead weigher with our peripheral (circular discharge), which is fully powered to get the perfect flushing effect, allows the dispersion table on the top of the multihead to be evenly fed. This in turn allows the software to run the perfect algorithm which is typically 4 weigh heads. Our unique ‘Cox & Plant Synchronisation’ system harmonises the infeed speed to the multihead weigher by tracking the run times which then automatically adjusts the speed of the conveyor. Please see data below gathered from trials we carried out in collaboration with Ishida.

The % of bags that were within target range

*Verified by a check weigher

What is the best way to feed a Multihead weigher to maximise yield and virtually eliminate giveaway?

The Cox & plant solution is our sophisticated software, so the intelligence is built in, meaning the operatives done have to think on their feet with ‘Synchronisation’. We would always recommend a spigot [or circular / full moon] discharge to ensure the dispersion table of the multihead weigher is evenly and proportionately fed to allow for even greater weighment efficiencies.

Do you integrate with all types of multihead weigher?

Yes we do, if our customers have a preferred weighing / bagmaker solution we are more than happy to integrate this into our processing line, for the preferred end of line solution.

Are there any products you can not convey to a multihead weigher?

Generally, most products are ideal for our electromagnetic vibratory conveying solutions, we have a test hub where trials are completed and in these COVID pandemic times we find ourselves operating in all trials are filmed then shared to be discussed by video conference post-trial to ensure we have achieved what the customer requires.

Can you provide the support platforms and gantries?

A full turnkey solution can be provided with associated walkways, support structures, access gangways for hygiene and QA purposes, together with pedestrian walkways.

View All Our Case Studies